The Hamm cemetery, located 4 km east of the city of Luxembourg, was temporarily taken into service at the end of 1944 by the 3rd American army. 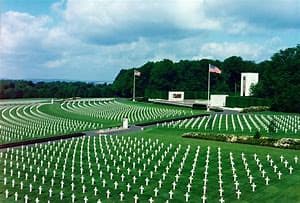 At the beginning of 1945, the cemetery was laid out to finally accommodate 8,412 graves. The largest number of soldiers killed in action had served in the 3rd Army.

In July 1945 the cemetery came under the authority of the Grave Registration Company.

From March 1948 the cemetery was closed to all visitors.

About 5000 remains were repatriated to the United States from the Antwerp Bridge. 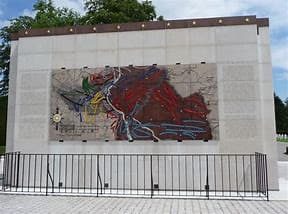 When a small temporary cemetery at Grand Failly near Longwy was closed, a number of remains were buried at Hamm, bringing the number of graves to 5,076.

After a complete transformation of the site, the newly developed cemetery was inaugurated on July 4, 1960.

General Patton rests at the beginning of the squares, between two masts carrying the flags of the United States.

He is buried here, among the thousands of brave soldiers who fought under him.

His memorial was once in the middle of the other tombs but was moved to its present location on March 17, 1947, to facilitate access for the many visitors.

In the meantime, our association has adopted 4 graves, namely those of the:

They were combatants of the 11th US Armoured Division who fell in action on 14 February 1944 during a confrontation against the 26th VGD near Bastogne.

In addition the grave of Colonel McVickar was adopted, who as commander of Regiment 318, was killed on 14 January 1945 near Welscheid.

Annually flowers are placed on their graves.