Born in California in 1885, General Patton was a complex and highly controversial character. He had a great concern for the welfare of his men and his greatest concern was to have as few casualties as possible. This explains its mobility and speed. He thought the faster you move, the less you give the enemy the opportunity to strike. He was not a superman ignorant of fear. He was scared like anyone else and was not ashamed to admit it. He was convinced of reincarnation; he believed that he had covered several centuries. Sometimes he felt he remembered incidents that had happened hundreds of years earlier and in which he would have been involved in other incarnations. But there is certainly an explanation for this phenomenon. It was the product of his reading and his imagination. He devoured all the military works.

It traces the key stages of his career:

Major-General George Smith Patton IV, son of the 3rd Army Commander, died on 27 June 2004 at the age of 80. George S. Patton IV was born on December 24, 1923, as the youngest child of George S. Patton III and Beatrice Patton-Ayer. Her two sisters Beatrice and Ruth Ellen were born in 1911 respectively in 1915. Like his father, he visited the West Point Military Academy, from where he graduated in 1946 as a second lieutenant. In 1952 he married Joanne Holbrook, whose father was a general in the United States Army. From this marriage came two daughters and three sons, namely: Georgina Margaret Patton, Helen Patton, George, Robert and Benjamin. As a colonel he participated in the Vietnam War where he was wounded. As captain and later brigadier-general and deputy commander of the 8th infantry division, he took part in the inauguration of the Patton monument (1954) and the Patton statue (1970). He visited Ettelbruck again on other occasions. Appointed to the rank of Major-General, he was at the head of the 2nd Armoured Division (Hell on Wheels). This same division had already been commanded by his father in North Africa and during the Battle of the Bulge. Major-General George S. Patton IV left the army in 1980. He spent the last years of his life in Green Meadows – Hamilton. 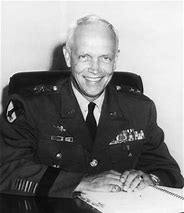